The land of Organic Moschofilero 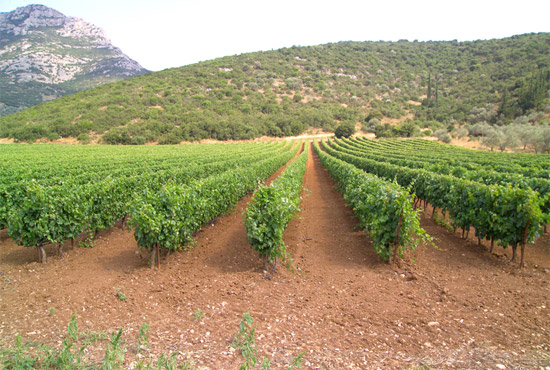 Pallandio is a village in the general area of Mantinia, in the county of Arkadia – Peloponnese. Mantinia is an appellation dedicated to the exotic Moschofilero, or Moscho, as many refer to it. Moschofilero is a pink-skinned variety but is principally used to make white wine. It is an elegant wine that overwhelms with its freshness and aromas, a wine that travels you to delightful gustatory destinations. The most popular style is a still, light, dry wine, also consumed as an aperitif, but there are also semi-dry or even sparkling versions. Moschofilero has an intense flowery character, with an emphasis on rose petal aromas, together with citrus and fresh fruit notes. Fresh flavours, fresh and crisp acidity, medium to low levels of alcohol, rarely exceeding 12%. Packing so much flavour at these levels of alcohol is a remarkable feat in today’s wine world. The wines are refreshing, elegant, aromatic and, metaphorically speaking, spontaneous. They are the liquefied essence of happiness, exhilaration, surprise and escapism. Their freshness makes them an ideal companion to a wide range of aromatic dishes with fresh herbs, ethnic and spicy cuisine, sea food or even sushi.

The style of Moschofilero wine easily suggests a region with a climate much cooler than the average Mediterranean Sea holiday resort. Mantinia is a mountainous plateau with high altitude that exceeds 650 metres (2,160ft), so the vineyards of the region can be considered alpine. The climate is continental, with mild summers, where nights are cold and breezy. Mild breezes and the lack of humidity create a favourable environment for organic viticulture, since diseases have a very difficult time affecting vines. Given such an opportunity, organic vineyards constitute a significant and rapidly increasing proportion of the area. Soil types vary, with a relative predominance of rocky clay, but fertility is always low and production is never excessive. Moreover, making a pale white wine from pink-skinned grapes is a difficult task and can be achieved only by doing all the vineyard work and harvesting by hand, as well as by using innovative practices and cutting-edge winemaking technology.

Epicurean’s Moschofilero comes from Pallandio. Its name comes from Pallas, son of the first mythical king of Arkadia. Another king of Arkadia, Evandros, son of God Hermes and nymph Nikostratis, founded the town Pallandion (the town that meant to be Rome) in Italy. Also, he was the first to bring the Greek traditions to Italy, along with the music and the Greek gods, and traces of it can be found throughout the whole Roman mythology.

Moschofilero can be produced in other areas as well, but the land of Pallandio makes this an unbeatable variety and our journey in flavor and aromas a unique enjoyment. There was only one way that this could be topped and that was organic viticulture. and then there was Aktis, our organic Moschofilero. 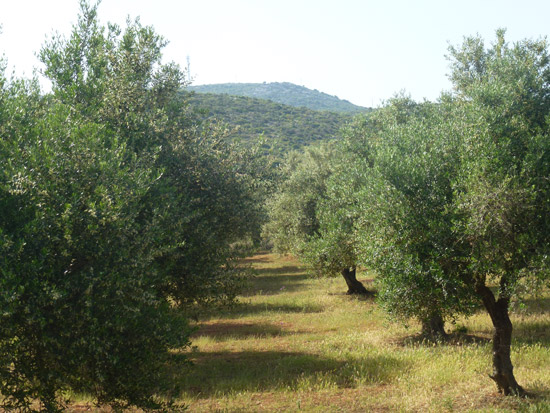 The beautiful area of Elea, where the olive trees are located, is in the northern coast of Messinia, approximately 10km from Kyparissia. The river Neda, the only Greek river named after a woman (the nymph Neda), forms a natural border between the prefectures of Ilia and Messinia, and flows into the Ionian Sea in the area of Elea.

Some people believe that Kyparissia got its name from the many cypress trees (Greek: kyparissia) in the area, and others that it was named after Kyparissos, the son of Minyas. Kyparissia has a long history (the first references to it date back to the verses of Homer) and is inextricably linked to agriculture. Thanks to its privileged location, temperate climate and geomorphology, it is among the most productive agricultural regions in Greece.

The Koroneiki variety is the “queen” of Greek olive varieties. It has two significant advantages: it is drought-resistant and consistently produces a lot of fruit (30 to 150 or more kilos of fruit per tree). The trees of this variety bloom in the second half of April and their fruit mature from October to December. The olive fruit oil yield is 10-20%. The olives are picked by hand, as this is the best method. Experts suggest this method for higher-quality oil quite naturally, since hand-picking prevents the olives from being damaged.

The town of Xinomavro and philosophy 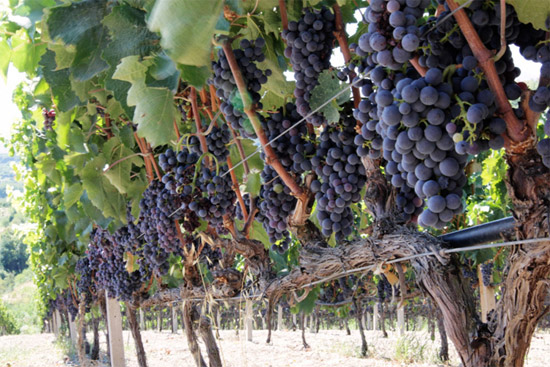 When discussing wine production in northern Greece, one should start with the regions dedicated to Xinomavro. This intriguing grape variety delivers an idiosyncratic wine that unveils its complexity to those who passionately explore previously untraveled gustatory paths. It has a complex, intricate and intellectually challenging personality, leading to an exploration and an awaking of the senses, while at the same time it is an ideal accompaniment to foods with intense and rich flavours. Xinomavro wines are usually released on the market when they are at least two years of age, having spent a significant proportion of that time in oak and the rest in bottle. These wines tend to rise to prominence with aging and are bright red in colour, having strong tannins, good structure and pure elegance. The essence of the Xinomavro character can be found in the complex, distinct aromas of red fruits, tomatoes, olives, dried prunes, tobacco and nuts, while wood-aging becomes evident in the subtle hints of spices. The bottle aging potential of these wines is long and nothing but remarkable.

Naoussa is built amphitheatrically on the foothills of Mount Vermio in Imathia, northwestern Macedonia. It is located 90km from Thessaloniki. Naoussa is a mono-varietal appellation, dedicated entirely to Xinomavro. This is the area where the variety excels and produces some of its best wines, offering amazing depth, breathtaking complexity and possibly the longest ageing potential of any Greek dry red. Several 40-year-old bottles, full of freshness and vivacity, stand as ultimate proof. The appellation area overlooks the plain of central Macedonia, located on the slopes of Mt Vermio, at altitudes ranging from 150 to 450 metres (approximately 500-1500 ft). Topography is a most crucial issue in Naoussa, since the hills of Mt Vermio offer a wide range of not only altitudes, but inclinations and orientations. There is no dominant soil type in the area, allowing for vineyards that are a patchwork of limestone, loam, sand and clay. However, organic matter is low, so yields are naturally restricted. The climate of the area can be described as a cross between Mediterranean and Continental influences and vintage variations exist but not to an extreme degree. Northern winds can be a major inhibiting factor, sometimes resulting in spring frosts in less sheltered vineyards.

Naoussa has been called a “heroic town” due to its contribution to the liberation revolution of Greece in 1821. Near Naoussa exists the perennial plane forest, which is characterized as a “Landscape of outstanding natural beauty”.

In Naoussa, the ancient philosopher Aristotle created his first school. One of his most famous students was Alexander the Great, who attended the school for two years in order to be taught philosophy, ethics, arts and mathematics.

The history of wine in Imathia is lost in the myth. Naoussa was home to the mother of Dionysus, god of the vine and the wine. According to the myth, at the point she was killed, the God made the first vineyard of the region bloom.

The town of wine and myth 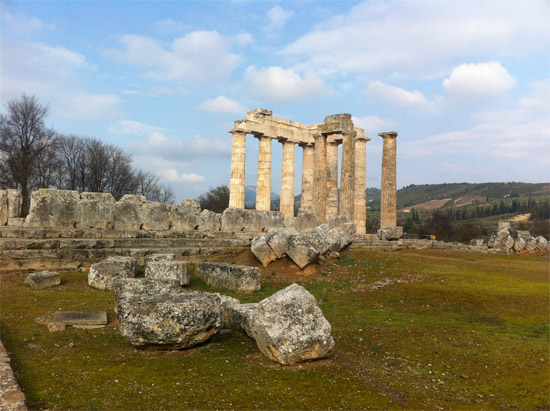 Nemea is a town in the county of Corinthia in Peloponnese, it is built at 320 meters altitude and its soil composition is perfect for the cultivation of vine.

The captivating vineyards of Nemea continue a bloodline running for millennia. The whole appellation is planted with a red grape variety that, in 1460, was officially given the name Agiorgitiko, from Agios Georgios (Saint George), which was the name of Nemea at the time. Nemea is an enchanting, charming wine that lets you relax and enjoy pleasant moments of social, human contact and intimacy. Usually, Nemea is a dry red wine aged in oak barrels for a minimum of 12 months. It has a deep colour, concentrated aromas of red fruit and an aromatic complexity. The rich body is balanced by the high-quality, mature tannins. A second interpretation of Nemea is that of a young red wine, with no oak aging and released just months after the harvest. This style is light, easy drinking wine, with medium acidity, soft tannins and fresh aromas of red fruits. Nemea always delivers gustatory satisfaction and versatility, since it is one of the rare wine styles that are appropriate for immediate consumption though they are also suitable for long aging in bottle. In gastronomic terms, Nemea is an ideal accompaniment to a diverse range of culinary options, compatible to modern dietary needs and requirements.

The complex facets of Nemea can be effortlessly traced back to the complex terroir that breeds the vines. The climate of the area is a cross between temperate Mediterranean and continental, but characterised by exceptional sunshine. The winters are calm and rainfall is moderate. Although there are subtle differences among the region’s crus, large variations in night and day temperatures are observed on most Nemea vineyards, especially during summer months. Furthermore, Nemea’s topography is very complex, with diverse terrains and altitudes ranging from 250 to 850 metres (800-2,800 ft). Human care is again evident in the amount of manual work that takes place in the vineyard, from winter pruning to vintage, but for locals, caring for the land is almost considered a payback. It is worth remembering that viticulture in Greece has always had a social dimension and the Nemea vineyards, since antiquity, have been inextricably connected to the life and progress of the local society.

Nemea is inseparably linked to Greek mythology, the legend of Hercules who killed the “Lion of Nemea” that terrorized the local residents. Then, the citizens of Nemea honoured Hercules by building the temple of Zeus, from which parts are saved and restoration finished in 2012.

The town is also known for the “Nemean Games”, which enacted on 776 B.C., were revived on 1996 and are repeated every four years since then. The participants, all of them amateur athletes, come from all over the world and run barefoot at the ancient stadium of Nemea wearing just a white tunic.

The connection of Nemea with wine goes back to the ancient times. King Flias reigned in Nemea, son of the god of wine and vine, Dionysus. It is said that the first vineyard was planted there as a gift of the god to his son. Nowadays, the Nemea region is the biggest viticultural area in Greece and great P.D.O. Nemea wines are produced there.

Also, in late August /early September, there is a wine festival that lasts for three days.